My journey from student nurse to inventor began whilst training to become a registered nurse at Kingston University; I had to complete a risk assessment essay which involved finding a problem experienced by nurses, health care assistants, or patients in a hospital or community setting, then solve the problem.

I looked at the prevalence of deep vein thrombosis (DVT) and the use of anti-embolism stockings as a preventative measure. Many people are at risk of developing a DVT - after surgery, for example - so anti-embolism stockings are routinely prescribed. In some cases (depending on the individual and type of surgery), these will be worn for around six weeks post discharge.

Anti-embolism stockings work by applying tight but gentle pressure to the lower leg in order to support the peripheral pump, (aka second heart) deep within the calf muscle, return blood to the heart so it can be refreshed with new oxygen. When blood is circulating efficiently and its viscosity is normal, the chances of DVT developing are reduced.

Amin et al’s study [1] found that almost 40% of DVTs occur after the patient is discharged from hospital care. According to the authors, this shows that the risk of developing a post-operative DVT continues for several weeks post-discharge. During my research, I discovered 25,000 people die in the UK each year from DVT, and that because anti-embolism stockings are very difficult to apply due to their tightness of the weave required to exert the necessary pressure to the deep veins, they are often ‘abandoned’ by patients.

Whilst I was in practice I noticed health care professionals struggling to apply these stockings.  There was no other aid easily available so staff and patients resorted to improvising with plastic bags, which are not fit for purpose and may cause harm to the patient.

I wanted to find a way to make applying these stockings easier for both patient and practitioner.  At home I did extensive research and experimented with various types of low friction materials until I found the right one.  This came with further challenges, because I had to ensure the material was safe and appropriate for the task.  I consulted with the Medicines and Healthcare Products Regulatory Agency

(MHRA) and was delighted when I found a suitable fabric.

Alongside a variety of different stockings I conducted specific experiments, recorded the results and eventually came up with my first prototype and named it Neo-slip.   I named the product Neo-slip because Neo means new in Latin, and Slip because Neo-slip simply slips the stocking onto the foot.

The low friction Neo-slip® is a slippery pouch design that creates a smooth foundation with a lubricious effect thus the stocking slides into place. Available in three color-coded sizes, Neo-slip® enhances the comfort of applying stockings and in turn, reduces the risk of DVT.

Once I had developed Neo-slip, I returned to those practice areas where I saw plastic bags being used and I introduced Neo-slip to the staff.  Feedback was excellent so I decided to organise focus groups with nurses, patients and members of the public.  I created questionnaires, interviews and applied to business competitions and Nursing awards.

I found a good patent lawyer, had Neo-slip Trademarked and applied for a Patent.  I have won an UnLtd award & was highly commended by the Nursing Times, Lloyds TSB & finalist in the Patient Safety Awards last year. I even met with Prime Minister (David Cameron) who said Neo-slip is a great idea and he was interested to learn about Deep Vein Thrombosis.

Feedback has been fabulous and extremely positive! As word spread, I began to receive orders and made the product at home with my children and my dad. However as the order quantities increase, I decided to outsource the manufacturing to a company in Nottingham. We now provide Neo-slips to NHS hospitals, private hospitals and care homes around the UK.

Paul Simpson (patient relative) “after mum had her operation, she couldn’t get her stockings on, we got her a Neo-slip and its as easy as putting on socks, Neo-slip is a life saver”

Louise  (Junior Sister) “Why was this not invented before now? Neo-slip is the best product I’ve seen in my 30 years of nursing”

Darren Basset (RGN) “Neo-slip is so simple yet so effective” 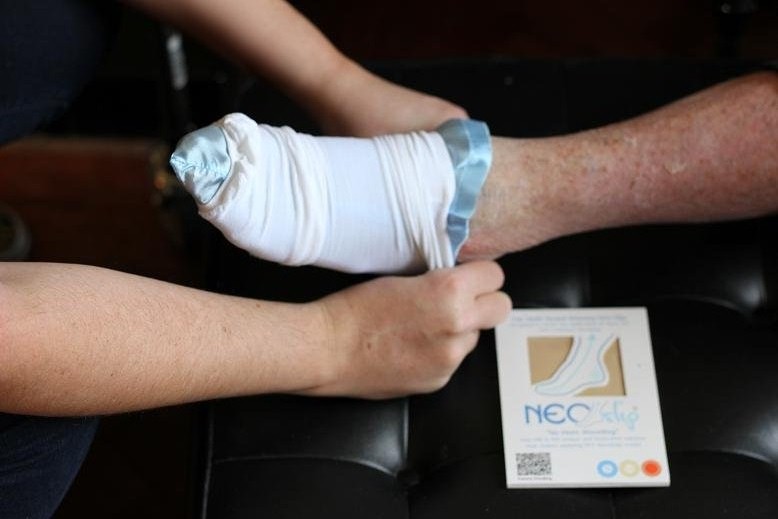