I love that word 'perspicacity' and it fitted well in the headline, but I thought I better just check that the meaning was actually appropriate. It is! It means: perceptiveness, wisdom and clear-sightedness.

So it is just the word I needed!

As I write this, it is a cold and frosty morning. Many moons ago at the end of long frosty nights, before waking the patients, we junior night nurses would treat ourselves to a bowl of porridge, with 'top-of-the-milk' [the creamy bit at the top of the milk bottle before it was decreed that milk should all be 'homogenised'!] Cooking the porridge slowly, all night, in a double boiler pan, was the duty of the most junior nurse. By 3am the smell of pans burning dry drifted inevitably through the hospital. If the nurse had a busy night, the bottom pan was not topped-up with water often enough--hence it boiled dry, and we'd have to start making the porridge again!

Of course, this was the time of Noah and his Ark (!), when  nurses served the meals and took them to the patient. This meant ensuring the patient could reach their food, had the food they could eat (and was appropriate for their medical condition and physical ability), and were in a comfortable position to do so. When all the patients had been served we would scan the ward to see if anyone needed help or encouragement to get the nutrition they needed.

In those 'dark ages' of the 1950s and 60s, we were still close enough to Miss Nightingale's findings regarding hygiene and nutrition, for those principles to inform our training. She had discovered that attention to these two basics improved healing and recovery rates. OK it wasn't all the grand peer-reviewed research that is funded these days. But it was an essential part of nursing.

This attention to nutrition (a.k.a. nutritious, well presented, appealing food), and hygiene, was also taught when training to work in 'the community'--either as a district nurse or health visitor. But it is easy to overlook such 'basics'. They seem just--too basic!

Yet studies have shown the poor nutrition status of hospital patients, and of 'the elderly'. In 2006, NICE produced guidelines for Nutrition Support [1]. They make interesting reading with useful guidance, but so dry and so far removed from an actual patient, or human being, that I wonder if they reach practice. And, is such information explained to care staff?

This is where plates come in, dear nurse.

Some years ago, on a short course for elderly care, I heard a talk given by a speaker from the Royal National Institute of Blind People (RNIB). I have never forgotten one piece of advice:

if a person with a visual impairment is served white food on a white plate, it is almost impossible for them to see it.

Just think of the amount of 'white' food that is served, especially for people who find chewing or swallowing difficult. White fish, white sauce, chicken, mashed potato, porridge, milk puddings, and so on. If the patient also has diminished manual dexterity, the inevitable result is that they will not be able to get the food on to a fork or spoon. If they do, then it is likely to spill or slop--making the eating experience messy for them, and irritating to a carer.  Meal times are dreaded and avoided. The result? - malnutrition.

The speaker pointed out that if light coloured food is served on a dark coloured plate the person can identify the food, and the chances of it getting into their tummies is increased hugely.  "Simples!" as the meerkat would say in a well-known advertisement!

I'm ashamed to say I had never thought of this and had been guilty of serving the food provided on to the plate provided, without the perspicacity to realise I was presenting some patients with an almost impossible task.

So, we get to perspicacity. It only takes a little perceptive thought and a hint of wisdom to look at the patient and, with our 'clear sight', notice that the eating implements provided are not easily handled by arthritic fingers, or hands weakened by a stroke. When I spent weeks visiting my mother in a stroke unit, I often saw catering staff put a tray on a patient's bed table--well out of reach of a patient unable to change their position without help. The tray would be removed with food uneaten. The patient needed that food. It had not been refused, it was inaccessible.

So the message of presentation and accessibility not only needs to be heard by nurses, but passed on to all the catering and care staff they work with if nutrition really is to be improved. It's not just about the food itself. Vision is needed, in the widest sense.

Vision literally affects self-care and nursing care. The RNIB speaker showed us Wylie Cards (Box 1), which were a real education. These cards have been prepared to show the effects of different visual impairments. Using a photograph of a well known site (the Tyne Bridge in Newcastle) the same picture is superimposed with shading to show how it would look to someone with glaucoma, diabetic retinopathy, macular degeneration, or cataract etc.

Being blessed with good vision, this was a revelation to me. It also explained why I had been irritated when my elderly grandmother was not able to see well enough to do her needlework, yet could criticise my brother for having his hair too long! Does this scene sound familiar?

I wish I'd seen the Wylie Cards then. You can see them by visiting http://nsbp.webs.com/wyliecardpictures.htm. It will make you much more perspicacious--for the benefit of your patients.

How to obtain Wylie Cards 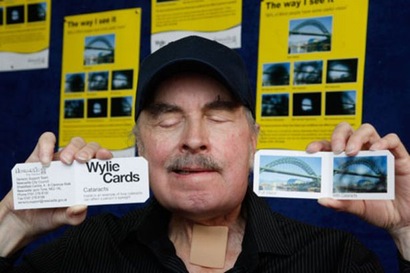 The Wylie cards were designed by John Wylie, who lived in Newcastle and as his vision deteriorated, wanted people to understand how he saw the world. He died in 2010.