A service for NHS colleagues

Despite being in a healthcare environment, NHS staff are just as likely to smoke as anyone else. There are few recent figures on this, but the 2009 NHS Workforce Health and Wellbeing Review (the most recent to date) found that 25 per cent of staff reported smoking some of the time, with around 20 per cent smoking up to ten cigarettes or cigars a day, and a small minority smoking over 21 per day.

The same survey found that smokers had up to a 34 per cent higher incidence of being absent from work compared to non-smokers. Economically, as well as morally, it therefore makes good sense for employers to try to help their staff to quit smoking. 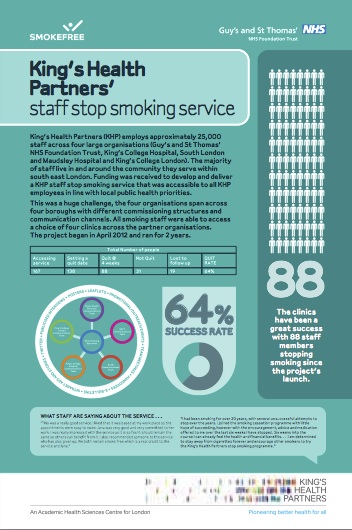 ‘It was a massive task,’ explains Alanna Molloy, the stop smoking co-ordinator at Guy’s and St Thomas’, who managed the KHP scheme. Jana Lloyd, who was employed as the stop smoking specialist across KHP, liaised across the four different organisations within KHP (spanning four different boroughs, each with its own commissioning structure) to find a suitable space for each clinic.

‘It was different for each site, but a lot of it was led by the space that was available as in hospitals space is at such a premium,’ explains Alanna.

Jana also made links with each hospital’s pharmacy to procure nicotine replacement therapy (NRT) for participants and contacted each separate communications team to get the message out that the clinic was up and running and ready to help.

How the quit scheme was advertised to staff varied across the different sites: at SLaM a Twitter Q&A session was held, at KCH some staff were referred through occupational health, regular health promotion stands highlighted the scheme, and all the sites made use of posters and the NHS intranet system.

The clinics used the evidence-based, NICE approved model for helping people to give up smoking, but with built-in flexibility, so those who needed extra support were given more pre-quit time and could continue on the course for longer. A multi-site policy was used, so that staff could attend clinics at any of the four sites.

At KCH, SLaM and KCL the clinics were promoted to all staff, including administrative, nursing and managerial level smokers. At GSTT the clinics were focused on non-clinical staff working in estates and facilities, with porters being targeted particularly.

Jana (now smoking cessation lead at the Royal Free London NHS Foundation Trust) introduced herself at the porters’ team meetings and ‘borrowed’ an office nearby in order to be seen. She even used the porters’ tea-facilities to get her face known and to build-up relationships.

‘At first she had a clinic time but there was no-one coming, so it was a matter of chatting and inviting people,’ explains Alanna. ‘That was key to getting staff into those clinics.’ Soon word began to spread, she says, ‘It was fantastic. People went back to their colleagues and said: “I used this, it was great. Giveitago.”’

The convenience of the clinics being on site proved invaluable. ‘We find staff attend clinics if they are close by,’ says Alanna. ‘We still run groups at GSTT and staff are very unlikely to come across from a neighbouring building because it takes too long and their whole lunch break is taken.’

‘The convenience was key,’ Alanna says. ‘If you give someone a prescription and say, “you can get this from your local pharmacy”, things happen between that happening, whereas if it’s on-site, where they work every day, there is no reason why they can’t just pop in and get it.’

Free support, free medication and being able to attend clinic during work time really helped,’ agrees Jana, who says the NHS attendees were more receptive to help than most regular clients.

‘The main challenges were around timing, nurses struggled to be released from shifts due to the nature of their work but apart from that I felt this group were much more responsive than the community population: they engaged with the service, completed evaluation questionnaires at the end and also acted as role models for other colleagues. For example, the head of IT quit through the scheme and this prompted a number of his team to join. ‘My passion and enthusiasm influenced the project’s success. Passion is infectious, staff could see that I cared and often they would say they succeeded because they didn’t want to let me down,’ adds Jana.

The Health and Social Care Information Centre’s (HSCIC) statistics on NHS Stop Smoking Services shows that just over half (51 per cent) of people who set a quit date successfully quit during 2013-2014. Alanna is rightly proud of the achievement at KHP.

...nurses struggled to be released from shifts due to the nature of their work but apart from that I felt this group were much more responsive than the community population...

Emma Willing, 36, a programme manager in mental health at South London and Maudsley Hospital (SLaM), quit via the staff scheme.

‘At the time I was a clinical specialist in mental health in a home treatment team at SLaM.

I started smoking at 14. I am not sure why, but I remember having a cigarette with a younger friend in the woods and from then on I smoked. It was gradual to begin with, but it soon increased. I was smoking before and after school, buying packets of ten.

I did give up once for two weeks, when ?I was 20, following a collapsed lung. That was the only real attempt, and even then it was half-hearted.

I heard about the staff stop smoking programme on the Intranet at work?and thought I would give it a go. I was determined to stop and knew I needed all the help I could get.

I attended all the sessions over 12 weeks.

Initially I used patches, slowly working down the strengths. By the time I went to my first appointment I had been smoke free for three days. I wish I had gone to see Jana [the smoking advisor] before I gave up,?so I could have seen my carbon monoxide reading as a smoker.

The scheme was a useful tool. It gave me motivation, knowing that I had to blow into a reader every time I went. That impacted as I didn’t want to “fail”. The patches helped a lot, but if I’m honest?I had made a decision three months previously that I was ready to give up. I had had enough of smoking.

It was really useful not having to pay for the nicotine replacement therapy (NRT)?as Jana gave me a prescription. I saw?the financial benefits immediately. A big motivating factor in giving up was how much it was costing. Sadly, I was more worried about that, than my health.

I haven’t smoked in two years and I can’t imagine smoking again. People say that I cough less, although I didn’t even notice I was coughing. Financially, it has made a huge impact. In 18 months, I saved £100 per month and went on holiday with the money.’

Original article published in The Advisor Spring 2015. The Advisor is a quarterly print publication, sent out free of charge to stop smoking advisors and tobacco control managers in the UK. To register for free copies, please visit:http://theadvisoronline.co.uk/subscription