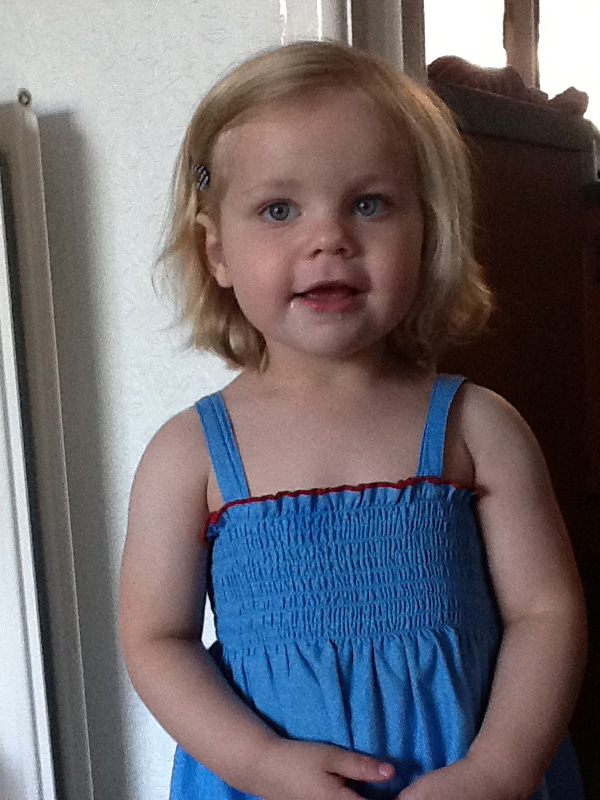 Within three short months of their daughter Florence’s birth, Judith and Chris Parsons’ world was turned upside down.  Eczema was diagnosed and standard creams and emollients for symptom control prescribed.

Over the next six months, Florence suffered from both severe eczema flare ups caused by her multiple food allergies, and skin infections which required almost constant antibiotics and hospitalisation on occasions. Seventeen different prescribed creams and ointments were tried, but Florence reacted badly to most. She was able to tolerate an oat-based cream which helped reduce the redness, but as it was runny it was absorbed quickly, necessitating half-hourly application, 24 hours a day.  In desperation, pure Vaseline was tried; it worked fairly well, but was time consuming and messy to apply.

One of the worst problems of eczema is itching.  “Florence was continually trying to find something to scratch against and would rub herself against furniture or against the seatbelt if she was in her car seat ” said Judith.  “She would also crawl up to people… as if she was after a cuddle, but … she was actually trying to see if their jumper was scratchy so she could use it to relieve the itching!” She also had trouble sleeping because of the constant itching and the tiredness was making her grumpy and irritable for most of the time.  This became a real psychological and physical drain on the whole family, particularly her brother (aged 14) and sister (aged 11).

Then one day it all changed for the better; during yet another flare up, a health visitor at the local clinic asked if they had tried DermaSilk garments.

I had heard about it because the hospital had mentioned them, but several times people had said, Florence’s condition wasn’t bad enough to warrant DermaSilk to be prescribed.  My thoughts were ‘How bad does it have to get before they think it’s worth prescribing DermaSilk?.

Rather than wait for Florence to ‘warrant’ DermaSilk, Judith ordered it online from Espère Healthcare Ltd (UK DermaSilk distributor).

When it arrived, Florence was bathed and thin layers of steroid cream and oat based cream applied; Judith said "We laughed saying we'd be back upstairs within ten minutes to apply the three inch layer of Vaseline that was our normal routine". However, once Florence was in her DermaSilk suit, her ankles lay still almost immediately, "I looked at Chris in amazement as Florence doesn't have still legs ever - she usually looks like she's Irish dancing!"

Florence had a settled night and when Judith went to get her up, she was surprised to find that instead of the usual grumpy irritable Florence, she found a refreshed happy baby. She was in for an even greater surprise when she changed her. “When I removed Florence’s body suit, I was absolutely amazed by her skin. It was no longer red and angry, she hadn’t been scratching all night and had had one of her first real night's sleep, and we had a proper pink skinned baby!”

The GP couldn’t believe the difference, commenting how good her skin was and that she actually looked the best he had seen her.  They told him that the hospital had said that Florence needed prescribing DermaSilk and he agreed to prescribe another set, so Florence didn’t have to miss out while the first set was being washed.  Florence’s hands and face dramatically improved, so DermaSilk seemed to improve her condition even where it wasn’t actually in direct contact with her skin.” Florence wears the garments both day and night, which keeps the itching under control most of the time. As a result, fewer applications of creams and emollients are required, freeing up time to spend with the family. Florence has still had severe flare ups due to her multiple allergies, but no longer requires antibiotics for these.

According to her parents, “The change in Florence was amazing, and it happened so quickly. From the very the first time I first put Florence into DermaSilk she became a different child. She’s now funny, contented, full of beans, starting to eat properly, and at last is gaining weight steadily. The Health Visitor was so amazed at the transformation that she had tears in her eyes. Best of all, our GP has also ordered a second set of clothing for Florence now he has had his eyes opened to the miracle properties of DermaSilk"

The change in Florence was amazing, and it happened so quickly.

But it’s not just Florence that has benefited from DermaSilk. Judith and Chris are now able to get some sleep at night meaning dealing with Florence is much easier and more manageable.  The older children now have quality time with mum and dad, and most importantly Florence now acts and plays like every other 10 month old child. "Our good skin days now outweigh the bad, we know her skin condition can change dramatically within 20 minutes but we know without her DermaSilk suit it would be so unbearable for us all." Thanks to DermaSilk life now has a light at the end of a very dark tunnel.

The associated effects of atopic eczema and other dermatological conditions are well rehearsed [1,2]. However, persistent itching is the most common and distressing symptom, and is difficult to manage. Severe acute flares can be managed using ’Dry’ and ‘Wet’ wrapping, the application of emollients and retention garments. Most commonly, products such as  Tubifast (Mölnlycke Ltd) garments are used [3,4]. However, these have a finite life (approximately 20 - 30 washes according to manufacturer instructions) and are designed primarily for use during eczema flares. These garments need to be used with care since they are occlusive and have to be discontinued if the eczema becomes infected.

DermaSilk is the first of a new generation of garments designed to both prevent and manage flare; when worn long-term as normal underclothes, the eczema is better controlled. [more information].  Whilst several studies have been undertaken in the past to demonstrate the short term (12 week) benefits of DermaSilk usage, a recently reported double-blind, randomised controlled trial [5] was undertaken to assess the usefulness of DermaSilk in reducing dermatitis relapses in 22 infants aged 4 – 18 months affected by atopic dermatitis, previously treated with topical corticosteroid and antibiotics. Children were randomised to group A (DermaSilk garments) or group B (cotton garments) and followed for two years.

The authors concluded that the study found a possible role for DermaSilk in reducing atopic dermatitis relapses.

The results of this study also suggest a cost benefit; DermaSilk garments are designed to last as long as conventional underwear - indeed, when outgrown, they have occasionally been passed to siblings. In the study, garments were only changed on average once per child over thetwo-year period. Whilst this in itself makes them cost effective, the fact that flares were reduced by up to 60 per cent in line with a reduction in steroid usage hints at other significant reductions in cost. For example, two pairs of DermaSilk pyjamas cost approximately £140, or 38 pence per day. By comparison, three sets of Tubifast worn over a 20 day “dry wrap” cycle will cost the National Health Service (NHS) £90 and will need replacing after around 20 - 30 days. With children flaring an average of nine times per year wrapping techniques could prove very expensive but the DermaSilk method would cover all the flares.

Box 1: DermaSilk Properties and indication for use

Given that the National Institute for Health and Clinical Excellence (NICE) estimates over 150,000 children in the UK have from moderate to severe eczema – around 700 per Clinical Commissioning Group (CCG)2, in terms of General Practitioner (GP) consultation time, medical prescribing and referrals to secondary care, these children are costing the NHS about £1 million per CCG. If European Academy of Dermatology and Venereology guidelines[6],  which recommend the prescribing of DermaSilk to children with uncontrolled eczema in primary care were followed, the number of referrals to secondary care would drop, the number of consultations that each child has with their GP would halve, and overall management costs would be lower. In these times of tough economic choices, spending money on prevention may be the way to reduce the overall cost of acute care in these patients.

Clearly the results of the study discussed, and nine other product-specific clinical studies, have demonstrated the clinical and possible cost-effectiveness of DermaSilk garments. Importantly, the case study and the two-year study showed that the garments both relieved itching and reduced the number of flares, consequently improving quality of life.

Interest in this field of preventative dermatology has increased considerably over the seven years that DermaSilk has been used in secondary care, so much so that the UK Centre for Evidence Based Dermatology has recently commenced a £1 million, 300 patient multi-centre study to confirm the results reported in the published trials. The results are not likely to be published for 2 years but that’s no reason to deny children like Florence now.

Well, our Florence has just turned two years old. She still wears DermaSilks every single night…she loves her "special jim jams".  She sleeps better, doesn’t need the five-times nightly creaming regimen, and wakes up much happier.  She still has … food allergies, but with her skin being so much better we can concentrate on avoiding epi-pen situations.

She now has a little brother…

...the blame for this welcome addition to the family must firmly be down to Florence's DermaSilks (we have more energy now for family time and couple time). Derma silks changed all our lives - I just wish that more people who are struggling with awful skin knew about them, its so simple and so much better for the body, not to mention the reduced amount of clothing we need now. Not to be overlooked is the reduced time clearing the drains and washing machine filter of solidified vaseline.

Keep up the good work. Chris, Judith and family.