Out of the Ordinary

Actually, no it doesn't - it's all here; the hidden bugle playing talents of one NHS professional, the singing waitresses, the smile, nay laugh, from Simon Stevens, and the sheer audacity of three excellent people, Roy Lilley, Terri Porrett and Jon Wilks, who dared to celebrate the achievement, creativity and compassion of those working in the NHS!

Oh What a Circus, Oh What a Show….

No, this wasn’t a reprisal of the 1978 hit by David Essex (sigh…), rather an amazing event to acknowledge some of the amazing and totally fabulous stuff by those working in the health service.

You may remember that in Issue 6 we featured the Academy of Fabulous NHS Stuff (https://pcnr.co.uk/articles/202/the-academy-of-fabulous-stuff), the brainchild of Roy Lilley, Dr Terri Porrett, a clinical nurse specialist (The Blonde), and Jon Wilks, Managing Director of UK HealthGateway Ltd and all-round good egg. The site allows NHS staff to post their innovative ideas, be they simple or complex, so that others can utilise them and improve care for their patients.

The Academy team decided that an awards ceremony was in order to reward the fabbest of the fab. Accordingly, rather then pull in a panel of judges who on the whole, wouldn’t have a dolly mixture about what NHS staff face on a daily basis, they used NHS peers. Votes were cast and the short-listed teams invited to London for ‘a bit of a do’ on the 26th November 2015.

So where did David Essex come in? Unfortunately, he didn’t, but we were treated to the sight of Roy Lilley in a ringmaster outfit and Jon Wilks in a red suit covered in hearts and topped off with the best ‘titfer’ in the room… Pre lunch we saw a range of circus acts which included two ladies wire walking, a chap being very, very bendy, and a lady twirling around the curtains.

If we thought that was a bit different to the usual award ceremony, we were further confounded by the array of party accoutrements scattered on the tables, which we were encouraged to blow, hit, pluck, throw, eat or wear! Never have I seen so much laughter, spontaneity and general all round letting ones hair down-ness in a room, let alone a room full of NHS staff! Even the categories for the awards were creative and entertaining, and were presented by a host of NHS s’lebs including Simon Stevens, Dr Phil Hammond and Peter Carter.

5127 refers to the number of prototypes that Sir James Dyson developed before finally marketing his first Dyson ‘Cyclone’ vacuum cleaner. Requirements for this included absolutely commitment, fierce determination, self-belief, refusal to compromise and dedication to perfection.

The winners were 5 Boroughs Partnership NHS Foundation Trust for ‘street triage’, a scheme that prevents people who are having a mental health crisis being detained in police custody (Figure 1). 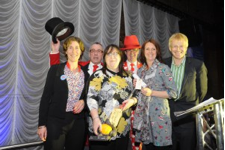 Often the biggest impacts are made by the smallest actions, hence the TNT or ‘Tiny Noticeable Things’ award for a project or person that has embodied this sentiment.

The winners were Kingston Hospital NHS Foundation Trust for their programme, ‘dining companions’; volunteers help on wards at mealtimes, specifically to help patients eat their meals or even just keep them company (Figure 2). 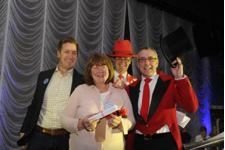 Each week, Roy and The Blonde pick a winner from among all the entries. It’s their personal choice and it’s not democratic, but the Piccalilley awards reflect FabNHSStuff’s passion for finding all the new, goosebump good people in the NHS and shouting about them.

This award went to Northumbria Healthcare NHS Foundation Trust for a series of projects which aim to improve patient experience. Projects include 'The Singing Sensations' 'Because they want to', 'Nutrition assistants - making a difference', and the 'Wellbeing library' (Figure 3). 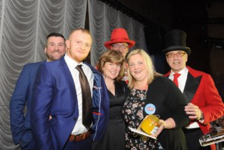 Ronnie Corbett and Ronnie Barker first broadcast their ‘4 Candles’ sketch in 1976. This award is for a team whose project has relied on an ability to listen and respond to feedback from any source.

The Award went to South Glasgow University Hospital for their 'Reliably finding out what matters to older people in hospital' project; posters are displayed above a person’s bed to remind anyone supporting that patient of the things that are important to the people in their ward (Figure 4). 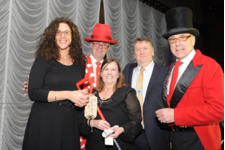 On the night of May 7th 1765 Hartly Larkin, a dockyard foreman at Chatham marine docks was deeply troubled; HMS Victory was to be launched the next morning and was 9.5 inches wider than the dock exit. Acting entirely on initiative, he convened a gathering of shipwrights and carpenters who set to work cutting away the docks’ timbers. Larkin and his team, quite simply, had done what needed to be done. This award is for a team who has echoed this concept in a project.

This award went to the NHS Emergency Care Intensive Support Team for their ‘SAFER patient flow bundle’; a set of simple rules that, if followed routinely, will help improve patient flow, patient experience and reduce length of stay across adult inpatient wards in acute hospitals (Figure 5). 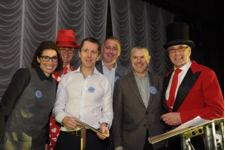 Sometimes a problem or issue is too challenging or substantial to be overcome by just one person. Penguins know this and demonstrate the extraordinary teamwork to protect themselves from adversity. This is an award for a team who has prevailed in the face of adversity.

The winners were the Department of Health with SAPHNA, QNI and the RCN, for the 'School Nurse supporting the wellbeing of young carers' pathway, designed to support integrated working between the school nursing service, other public health nurses and partners in supporting young carers and their families (Figure 6).

Figure 6. Department of Health with SAPHNA, QNI and RCN

For those who have been brave enough to reject mindless conformity and find a new, inspiring and effective means of doing something.

Motiv8 North West Wales were the winners for promoting the link between mental health and activity  for  through an annual event of sports activities. People feel able to connect with others, have fun and do not feel so isolated in such a rural location (Figure 7). 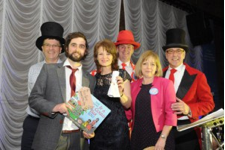 Nottingham University Hospitals NHS Trust for their 'Safe Staffing' app, a simple, quick to use tool that allows the trust to see an accurate, live staffing position from ward to board (Figure 8). 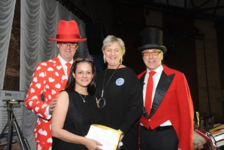 It was over all too soon; #FabAwards2015 trended on Twitter and we left for home. While I suspect that we bought up the average age in Shoreditch by a considerable number of years for a couple of hours, the giggles and fun and sheer collective enthusiasm made its streets ring!

You’ll be able to read about some of the projects in this issue, and as both the Academy and PCNR are passionate about sharing practice and shouting about good things, PCNR will be featuring projects from the Academy in future issues. In the meantime, take a look at the video - HERE – and the pictures from the event - HERE  (you might spot me in there!), and think about what you can contribute.

Congratulations to all our winners and a huge thank you to everyone who has contributed and shared on FabNHSStuff.

It was a huge privilege for us  to meet everyone and celebrate their fab work. We thank our sponsors for helping us to make this awards ceremony possible, there is so much to celebrate and be proud of.  We leave you with a quote from Simon Stevens ‘FabNHSStuff Awards are a high energy moment recognising the energy of what you are all doing. What you’re  doing represents the future of the NHS, everything you are doing makes a difference …. a cumulative effect of all the small improvements everyone is making’.