How dense are you?

What is dense breast tissue?

Mammograms are effective on fatty breasts as it can 'see' through the tissue. However, dense breast tissue can mask and hide cancers making it difficult for the mammogram to detect any abnormalities. As seen in figure 1, dense breast tissue appears white on the image as does a cancer tumour; it is like looking for a ball of cotton in a snowstorm; the more dense tissue, the more white areas. 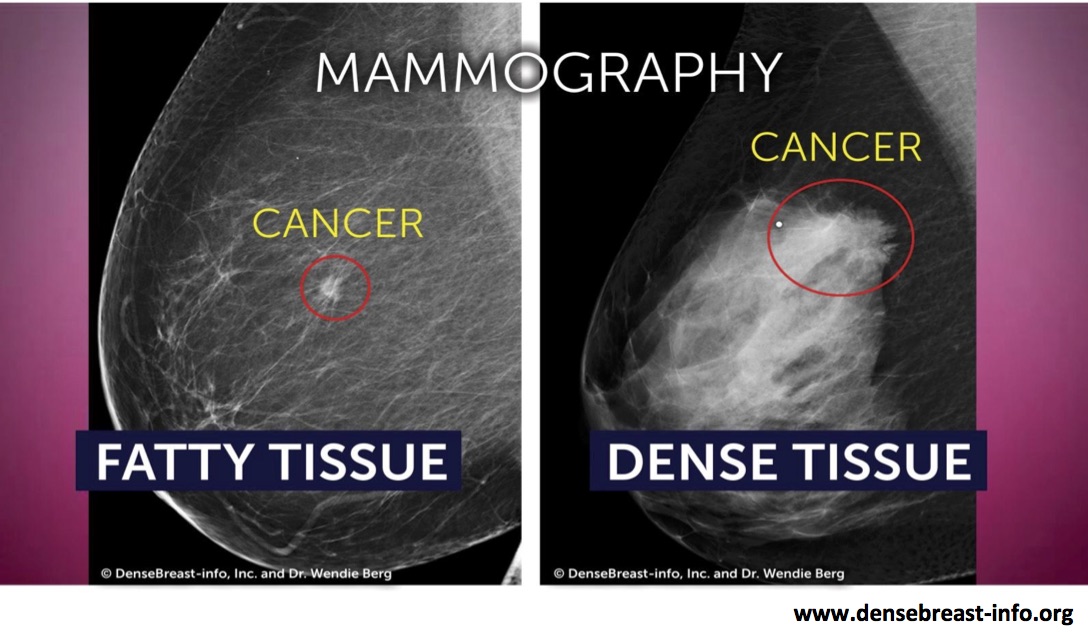 It is important to note that density cannot be detected by feel or if a breast is 'lumpy'. Density can only be detected by a mammogram image. Research proves that breast density is a well-established predictor of breast cancer and women with the densest breasts are  4-6 more times more likely to develop breast cancer than those with the least dense breasts [1]. In the United States of America, following the efforts by dense breasts advocates, 31 states have passed legislation, notifying women about density following a mammogram.

The NHS Breast Screening programme in the UK does not inform women of their breast density composition, nor does it offer procedural supplementary screening on dense breasts. In the UK, following a 'normal' mammogram result, some women are being diagnosed later with breast cancer at a more advanced stage.

1. Breast density is determined through a woman's mammogram and described as one of four categories (Figure 2).

2. Dense Breasts are normal. 40% of women age 40 and over have dense breasts.

3. Although normal, dense breast tissue is a risk factor for developing breast cancer and the denser the breast, the greater the risk.

4. Mammography remains the standard screening test for breast cancer and is proven to reduce deaths due to breast cancer. However, in dense breasts cancers can be hidden on mammography and may go undetected until they are larger and more likely to have spread.

5. Other screening tests, such as ultrasound or MRI, when added to mammography, substantially increase the detection of early stage breast cancer in women with dense breasts. 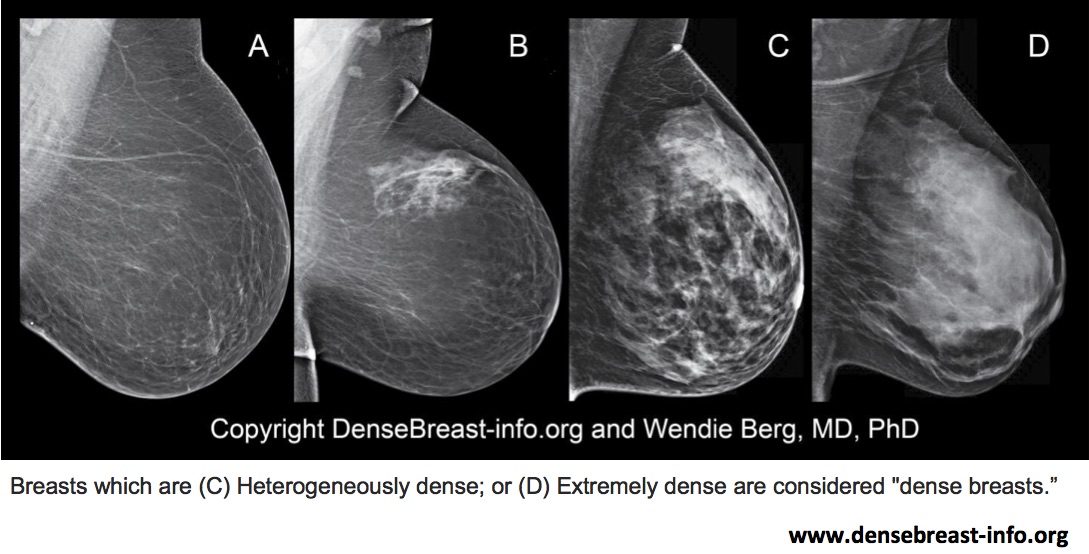 I live in France and in March 2016, just after my 50th birthday, I was invited for my first ever mammogram.  The radiologist announced it was 'normal'; no abnormalities, but as dense tissue was detected, a decision was made to carry out an ultrasound.  I was directed to the next room where an area of concern was discovered and the following week a biopsy confirmed a small 8mm invasive cancerous tumour.

After a lumpectomy to remove the tumour, I attended 6 weeks of radiotherapy and as my tumour was detected early I avoided a mastectomy; reconstructive surgery and chemotherapy.

Undoubtedly, the French breast screening programme contributed to my positive health outcome, whereas in the UK, my cancer would have been left undetected.

Two days after my operation, I formed a patient advocacy to educate women in the UK about dense breasts.

Breast Density Matters UK  believe that women need to have this information so they can make informed decisions about their breast health taking into account family history and lifestyle, and discussing their options with medical experts to decide if further screening is required (eg, ultrasound, MRI).

Breast Density Matters UK have recruited breast cancer experts to support our campaign and act as dense breasts advocates. They believe that 'our campaign is an important one that could save lives'. Ultimately, our mission is to implement change - a density inform law that could help to achieve early diagnosis and therefore improve health outcomes and save lives.

For this reason, a petition has been launched.

We have recruited Breast Density Matters UK Ambassadors throughout the UK; mostly women whose cancers have been missed, or received later stage diagnosis and have undergone mastectomies; reconstruction and chemotherapy. If you would like to be an ambassador (men welcome too) please contact me. Thank you for reading this article. It means that we have achieved our initial mission to raise awareness and have educated you on dense breasts. I would urge you to share this information with your family members, your friends and work acquaintances. For further information, do not hesitate to contact us. We would love to hear from you.

Mammography is NOT as effective on dense breasts

In the UK, up to 3,500 breast cancer tumours are missed each year due to ineffective mammography on dense breasts [2]

In the UK, why is breast density information withheld?