...and Sudddenly, Two Come at Once!

If you'd like to know more about our story, please visit my website,  where you can also find links to buy my book I’M NEVER ILL (A journey through brain surgery and beyond…). Alternatively, you can get it directly from amazon (http://ww.amazon.co.uk) by searching Mark D Pritchard. The paperback version is £7.99 while the e-book is only £1.99.

I'd love to say that I arose on Easter Sunday, but I won't bend the truth. I'd been fighting off the nurses as I was coming around in intensive care. One of them had put on my notes, “Mind the left hook!” I'm one of these people who can't fathom out why people are abusive to NHS staff, so I was mortified to learn that I'd been lashing out at the poor girl. When I was able to, they gave me a piece of paper to write on as I had a ventilator in my mouth and couldn't talk. The first thing I wrote was, “I thought you were trying to kill me.” Have you ever wondered what is going on when a patient lashes out in a semi-conscious state? I don't remember hitting out and, although I vaguely remember writing something, I don't remember writing those actual words or even thinking those thoughts. But the evidence was there and documented.

This happened only six months after my wife, Sarah, and I had met, although she wasn’t my wife at the time. I was 48, five years older than her. She worked as a higher level teaching assistant at a local school, while I conducted driving tests for the DVSA at local test centres.

It was in the early hours of the previous Wednesday that my brain haemorrhage struck and I was admitted to the Royal Gwent Hospital (RGH), Newport. The small bleed was from a blister-like aneurysm. It was, apparently, not likely to cause much of a problem; however, the leaked blood clotted and blocked the channel where the cerebrospinal fluid drains into the spine. The build-up of fluid caused hydrocephalus and the subsequent pressure on my brain sent me slipping gradually into a coma.

Sarah's perception was that they were understaffed. It was she who insisted that I was unconscious, while the overloaded nurses who popped in briefly from time to time were satisfied that I was sleeping. Had Sarah not pressed the issue, I may not be here now to tell the story. Once they realised that I was unconscious, we had to wait for a specialist neurological team to arrive by ambulance from the University Hospital of Wales (UHW) 12 miles away. This took about four hours. Time was ticking' the medical staff were, as Sarah says, “getting on edge” about my condition.

Once at UHW, they drilled a hole into my skull to relieve the pressure of the fluid. It was two days later when I began fighting the nurses before eventually coming round. I'd remembered everything about the brain haemorrhage, the journey to RGH and events before gradually slipping into a coma. I was taken to a high dependency ward in neurosurgery. Here, for about 24 hours I suffered terrifying hallucinations (apparently a side effect of the coma-inducing drugs coming out of my system). When my eyes were open, my mind created its own versions of my surroundings. When they were shut, it just created bizarre images in my head. The nurses tried to get me to close my eyes and sleep. I felt that the better of the two evils was to keep them open, although I can’t remember why. 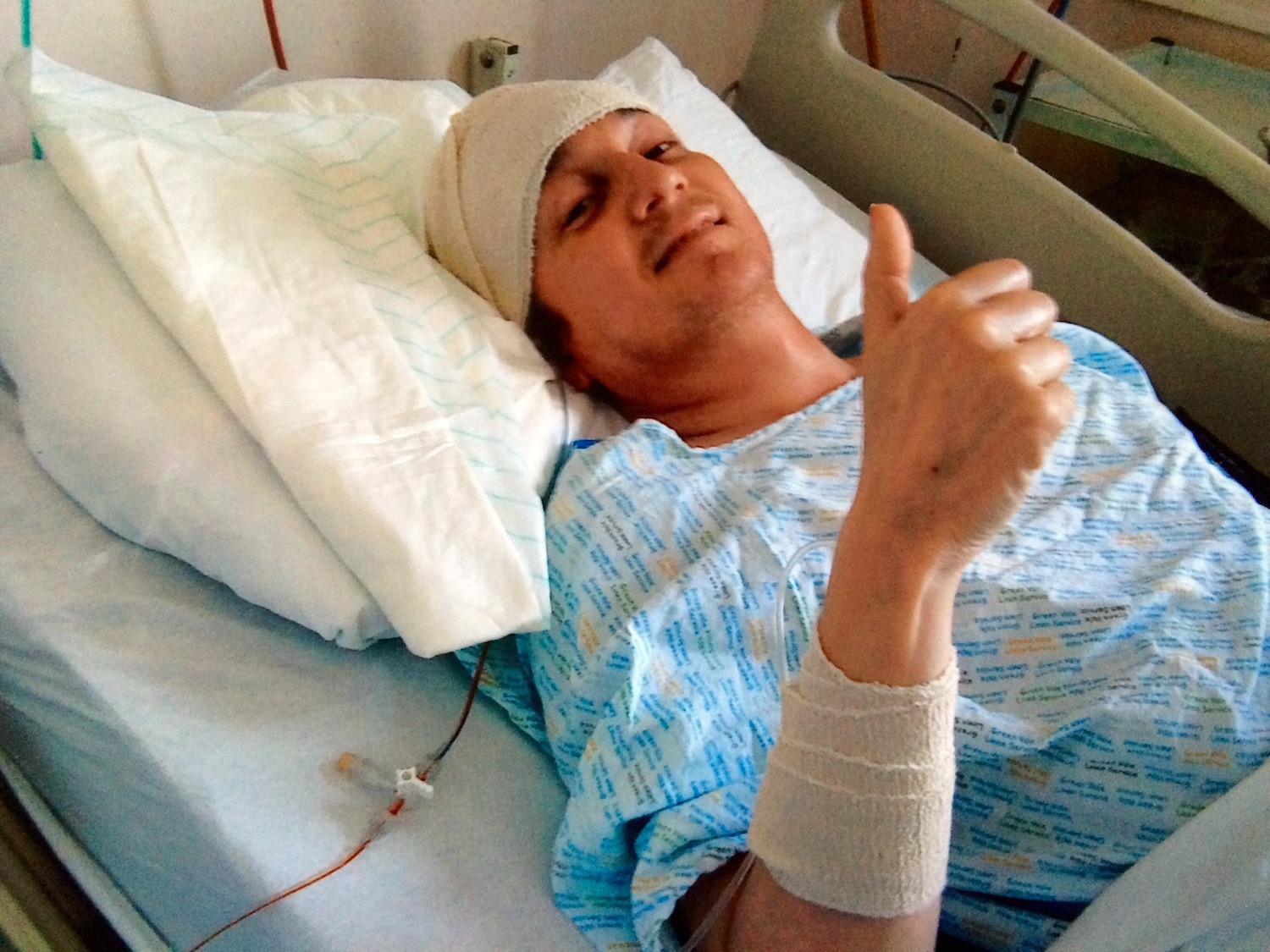 Out of a coma

There were many ups and downs during my three and a half week stay at the hospital. I developed an infection in my head, which made me extremely ill. I underwent neurosurgery while awake. Twice.

Much of the time that I spent there was waiting for the doctors to decide how to tackle the problem. The aneurysm was too small to coil from the inside or to clip from the outside. So they decided to insert a balloon via a catheter inserted through the groin to block off the blood supply to the damaged area. The doctors were uncertain as to whether or not the blood would reach all parts of my head, as we all have differences in the ways our vascular systems are “plumbed”. Because of this, I had to remain awake during the surgery so that they could perform a blood-flow test. Every five minutes or so, for 30 minutes they would check that I could speak and move my limbs. Once they had established that the blood was circulating as it should, they expanded the balloon a little more just to secure the seal. This pressed against a nerve, causing excruciating pain and double vision. They had to abandon the procedure, go away and work out another method.

Two days later, they inserted nine or ten (I never found out the exact number) platinum coils in the carotid artery. I was given the option to be asleep during this procedure, although I opted to remain awake, just in case the same nerve had been interfered with again – I was concerned that I may have awoken with the same excruciating pain and double vision, with it being too late to reverse the process.

Now, the scrap value of my head is worth more than the actual value of both mine and Sarah’s cars added together.

I have not one single complaint about the service I received from all NHS staff. I had great fun with nurses and doctors. They made me feel at ease throughout. I built up a wonderful rapport with the nurses on the wards. I think I was even forgiven by the intensive care staff for lashing out, too. I simply cannot praise enough the consultant interventional neuro-radiologist (I think that’s what he was called) for the way he handled both of my operations. I felt as much at ease as was humanly possible throughout it all. The mashed potato I was served at mealtimes was pretty awful though.

I returned to work just THREE months after the brain haemorrhage struck – seriously! The DVSA kept a close watch on me, but luckily, I had escaped with no loss of faculties. Maybe my memory was slightly worse, but it’s difficult to quantify as it was always bad beforehand.

In August 2012, I had an episode of severe pains in my head. After this, I began to suffer complete double vision. I was taken to UHW, . It was during this time that I experienced a side to the NHS that disturbed me. I was told that I should be kept in hospital to wait for an MRI scan - if I were to be discharged, I’d have to wait months for it. I opted to stay. I was there for two weeks before I received it.

After a while, during my stay, the double vision would come and go, depending on what I was doing and even on positions that I was lying in. It was all rather odd, but eventually confirmed by ophthalmology. The ophthalmologist was extremely helpful, explaining what was happening and why, even telling me I would be a great case study for her students. However, during the two weeks that I was waiting for the MRI scan, there were two doctors whose behaviour towards me was dismissive. I was made to feel that I was wasting their time and that my double vision was, in fact, psychosomatic. This is the only bitter taste that has been left over my experience. I don’t put it down to the NHS, but rather individuals would couldn’t, or wouldn’t, see the patient perspective. I have explained this in more detail in my book, in a chapter entitled One Flew Over the Cuckoo’s Nest, the title of a film were a sane man was admitted into a mental institution.

On the other hand, although it is clear that medical staff need to understand patient perspective, I sometimes think that patients could be educated over matters relating to doctor/nurse perspective. It would be interesting to know exactly why they treated me in such a dismissive manner. I have some thoughts on this, but that would be a whole new article to write.

Four years later, at the end of June 2013, and only three months after moving out from Newport to the Welsh countryside, Sarah was diagnosed with breast cancer. She had a lump, which we named Clarence, in her left breast. She was treated at Nevill Hall Hospital in Abergavenny and Velindre Hospital at Cardiff which specialises in cancer treatment. A lumpectomy was performed on 11th July at Nevill Hall.  During the follow-up appointment on 24th July, the doctors informed us that Clarence had been removed with clear margins. However, they’d found that a microscopic trace of cancer had been found in the sentinel lymph node. They needed to remove all the lymph nodes under the left arm as a precaution.

The doctor said, “We’ve saved a space for you... tomorrow. Can you do it?”

We didn’t hesitate. People complain about the NHS, but really, when the chips were down, our service has been remarkable. I won’t attempt to find the words as there are occasions where they, alone, simply cannot convey things just as we would like them. I’ll just say that any words I’d be likely to think of would be superlatives. If I could find one better than a superlative, I’d use it. Having said that, the mashed potato she was given in hospital was bloody awful – just the same as the stuff I’d been dished up at Cardiff. Is it just Wales?

On 25th July, less than a month from diagnosis, the job was complete. Did I just say complete? Oh yeah... of course, there were the mere six doses of chemotherapy and three weeks of radiotherapy to follow. The support we had throughout this was unwavering. The NHS was our rock. We had a telephone number to call at any time in case of emergencies or just for things that we were concerned about. We needed to use it a few times. Sarah had some very rough times during her chemotherapy. She was admitted to Velindre once and Nevill Hall once during these times. While in Velindre, she came up with the immortal line, “I must be ill, I like it here!” All the staff were wonderful throughout. She had a pretty good nurse at home, too, who had to juggle caring for her while conducting driving tests around Wales and just over the border into England. 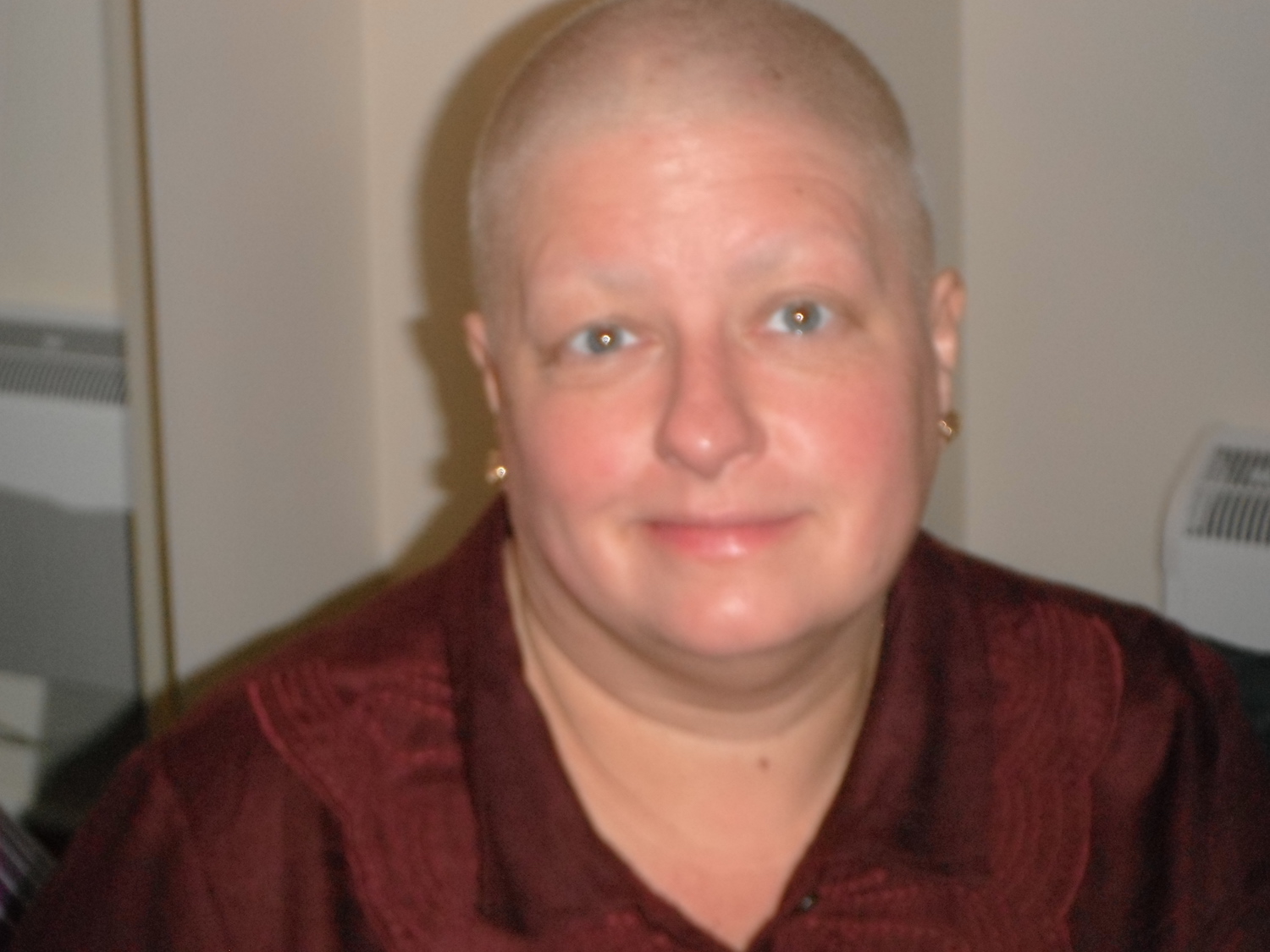 Sarah has been cancer-free ever since. We now live normal lives. Well, in fact, we live better than normal lives. Our illnesses have made us change our outlook on life. We live more for today, having taken up American road tripping and 1950s style dancing. In August 2014, six months after Sarah’s chemotherapy and radiotherapy had ended we celebrated in style by driving the length of Route 66 from Chicago to Los Angeles. It was a wonderful adventure.

Just before the trip ended, Sarah came up with another immortal line (she’s good at those), “This was worth having cancer for.” My eyes well up every time I say that, or even write it as I am now, and I’m struggling to see the keyboard.

On a recent driving test, a candidate told me she worked at a factory where they make and pack food for local hospitals.

“Do you make the mashed potato?” I asked.