The World, War and Nursing

One hundred years ago this month, the world was plunged into one of the most disastrous wound scenarios it's ever seen - millions of them. Wounds to bodies were devastating, but the wounds to minds, determinedly unacknowledged, almost worse.*

So this set me thinking about war-related experiences I've encountered. In our conflicted, modern world, some of you may also have done so.

By chance, my daughter and I discovered we had a WWI hero in our family. My grandmother's younger brother fought as a soldier in Flanders. He was injured when trying to pull a massive gun from under the wreckage caused by enemy fire. He earned a hernia for his efforts. Although he was temporarily invalided, he returned to the Front. His record made it clear that he was not responsible for his injury; this was a necessary comment because the horrors the soldiers were experiencing resulted in many self-inflicted injuries as the men could no longer face being in the midst of such carnage. But of course this was before PTSS was 'discovered' and such men could be shot for cowardice.

Our Sidney carried on, and was awarded the Military Cross for showing exemplary bravery in action, and continuing courage and devotion to duty when bringing back information under heavy enemy fire.

The wounds of battle and the effects of mustard gas caused many WWI veterans serious health problems for the rest of their lives. Do we ever consider this? A few years ago I had the privilege of meeting one of Sir Archibald McIndoe's nurses. He was the pioneer of plastic and reconstructive surgery in WWII, often creating faces still perceived as horrendous, but which helped young men stay alive.

She told me that he deliberately recruited attractive nurses. Feeling this somewhat unfair, she challenged him about it. Well, he told her, these are young men who have been tragically scarred for life. If they can be treated as normal by attractive young nurses when their bandages are removed, it can give them the confidence which is key to their recovery.

He was a wise man, as well as gifted. His patients formed themselves in to the Guinea Pig Club--as they proudly saw themselves as Sir Archie's guinea pigs. Many present day procedures grew out of the treatment for their horrific burns and injuries.

In WWII, my aunt was a Sister in Princess Mary's RAF Nursing Service. She had done her orthopaedic training before doing her general training. She reckoned that she should put that to good use, and volunteered for PMRAF nursing as soon as she could. I knew that she spent much of the war in orthopaedic units in this country (where bombing attacks occurred nightly) treating the wounded airmen, often with complex bone injuries. But it was only as she grew older, I asked her about nursing 'in the war'. 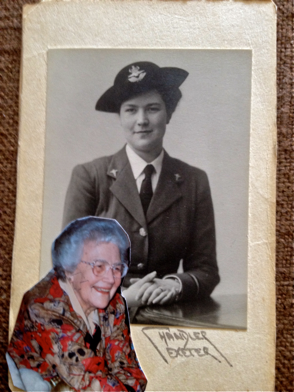 She was a quiet, unassuming, lovely person; she told me about her duty on the ships taking wounded soldiers, sailors and airmen from the war in Europe and N. Africa, back to the United States. I blithely commented: "Oh, so I suppose they were all fairly ok, as they were 'fit to travel'?". She gave me a quiet smile as she said: "Well, not really, our operating theatres were working 24/7 for the whole time of the journey."

"And how many staff?" I asked.

"Well, there were two of us, (Nursing Sisters), some orderlies, 2 surgeons, and that was about it." "And", she added, "if ever we did manage to catch an hour's sleep, we had to leave our doors open as we were open to attack from enemy submarines. We only had an escort for a few miles after leaving England then we were on our own as we crossed the Atlantic, so we had to weave around a bit."

You know what? All this made me feel very humble. Especially when I think of the way we often treat 'old' people today. They just seem rather slow--in every way. Do we ever stop to think what their lives have encompassed? Do we ever ask them? Are we prepared to understand their scars? And I haven't even mentioned some terrible Prisoner-of-War experiences I've been told...

I know one thing--I'm not sure I could show the courage and devotion to the 'everyday duty' of nursing very, very sick and broken people in such threatening conditions, at the age of 24. Could you?

"if ever we did manage to catch an hour's sleep, we had to leave our doors open as we were open to attack from enemy submarines. We only had an escort for a few miles after leaving England then we were on our own as we crossed the Atlantic, so we had to weave around a bit."

*Read Pat Barker's novel Regeneration for some insight into this.